DISCLAIMER: The views expressed are my own and not of Peace Corps. 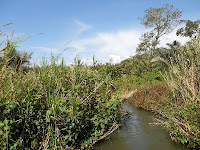 A couple of weekends ago I found a wetlands area a short walk from my house here in Bandjoun. That was some great luck! It's probably only here in the rainy season, but right now there is a colony of Viellot's Black and Village Weavers there. I also managed to find some other interesting species such as Zebra Waxbills (bright red and orange-striped finches) and a Wire-tailed Swallow! I did hear what was probably a rail of some sort, but strangely I no luck finding any waterfowl or wading birds. I'm not complaining though - the birds that were there were gorgeous, and there were fish jumping in the stream. 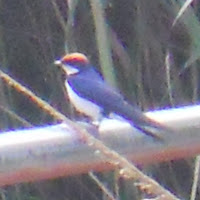 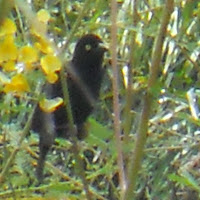 The rest of the town also had some interesting avian visitors. In addition to African Pied Hornbills and Green (Guinea) Turacos that occasionally show up, and the resident Fiscal Shrikes, Red-cheeked Cordon-Bleus, Splendid Glossy Starlings, Fire-crowned Bishops and other wonders, I have seen an Ovambo Sparrowhawk a few times. I managed to capture this one at the top of a tree practically in the middle of town! 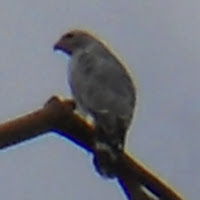 Just beyond the stream and up a steep hill, I managed to find this Ashy Flycatcher also. Plus some sunbirds, canaries and mystery warbler I'm tentatively calling a Red-Pate Cisticola. (Oddly, the red-pate shows up in the video I took but not in the photo, where it looks more like a deformed Willow Warbler. Neither of the pictures my field guides bare any resemblance to the other, and I basically compared photos I found online!) In any case, this flycatcher was MUCH easier to identify. 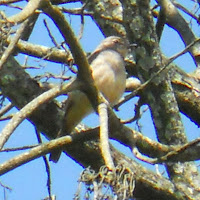 Teaching is going really well this week. Since the first sequence just ended, I had to grade all 6 classes last week. I'm very glad I don't have more classes than that, and only around 60 students per class: it took 2 days to grade all the exams, and then 4 hours today to record the grades! Some of the tests were from students who weren't on the roster (yikes - I only now realized they were hogging the computer lab from paying students!), and other students didn't turn in assignments at all. It's also hard to reconcile the names on the papers with the roster because they all have 4-5 names which they use in random combinations. One student signed her name "Sylvie" when the prenom is least important element of the name! I had to do some detective work and elimination to figure out who it was.
I also discovered (finally seeing the student rosters for the first time today) that the student numbers the students have all been writing on their assignments are mostly wrong. I was hoping that numbers would be infallible if I couldn't read the name. So much for that plan!
Four of the 6 classes did fairly well, averaging about 12/20 (which is at least a passing grade). Sixiemes did not, averaging 9/20, the majority failing in each class. That was even after fudging the grades by turning all work other than the final exam into extra credit. The average before that was 7/20. I'm really going to have to slow down for them.
Today the subject for the Seconde class was the different types of computers. I figured there wasn't much point in following the textbook and teaching them about hybrid, analog, neXT computers and mainframes (and the whole history of the IBM product line), so I gave them the latest on PCs, laptops, tablets, smartphones and "smart" vs. "dumb" clients. The students were so excited to see and touch my Blackberry also, and then they were asking me price ranges in dollars, euros and CFA on all the different types of computers I described. Phew. It is so much more interesting to talk about tangible objects rather than the term definitions and historical objects (Pascaline!? Abacus beads??) we've been dwelling on for the past 6 weeks.

I am noticing also that it is raining pretty much every single day. It doesn't last long, but it is very very hard when it does rain. One issue is that if it suddenly starts during class, no one can hear anything unless you close the windows, and then the room is pitch-black. Plus, no one wants to leave school and walk in a downpour. Even after it stops, the roads are slick and muddy, and you end up at least with shoes just covered with red mud.

Laundry is another inconvenience: I washed my clothes on Friday, and I was only able to take my socks in today, 3 days later (since I don't have a dryer or anything!) Even though my neighbors were sweet enough to move the socks under the roof overhang before the first rain, it still took 3 days for them to dry. The irony of course is that when the sun shines, it's so hot that most of my clothes are dry within 4 hours. So if I'm lucky, I can have laundry done end-to-end on the same day. But the rain just rolls in at random. Last night, I saw lightning flashes around 11:30pm that went on for a while. Then thunder suddenly struck, I heard the wind come out of nowhere, and then just sheets of rain DUMPED on the roof. I don't think I've ever heard rain that hard in my life (and I am from Seattle and lived in the Midwest, btw).

Another thing I found strange was that after a whole day without power when it hadn't even been raining, we had this sudden powerful storm and the power stayed on throughout. Go figure.
Posted by Christine Vadai at 12:59 PM