DISCLAIMER: the views expressed are my own and not of Peace Corps.

Today I am posting a bit of a multi-media presentation. First, a few bird photos taken in the past week: 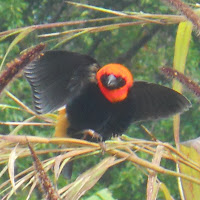 This is a handsome (and frisky) male Fire-crowned or Black-winged Bishop, defending his patch of corn on Saturday, October 23, 2010. I think they've gotten used to me and the camera. This one barely moved when we approached, and I was also able to take this video of the same bird! 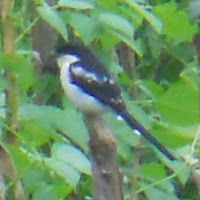 This is a Fiscal Shrike. They seem to be really common here, but so far fairly camera shy. This one was even calling, but they take off the moment I take notice of them. Oh well, they seem to be getting used to me little by little. And they are still not as shy as... 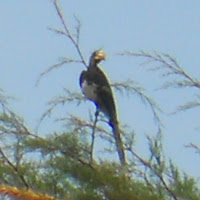 ...African Pied Hornbills. These guys are spectacular (though modest compared to many of the other hornbills in Africa!!) This one was calling loudly and sitting right next to the lycée, but the moment I stopped and took out my camera, he went mute. I was able to capture a short vocalization in my video here.
Other recent bird videos are on YouTube here:
Orange-cheeked Waxbill
Red-cheeked Cordonbleu
WARNING: these videos are not high-quality (to say the least), but they do capture the general experience of birding here in Cameroon. Even plain-looking birds can show surprising flashes of color and/or have beautiful songs. It's also useful to capture the songs for later reference, since birding by ear can be a far more useful skill than birding by eyes alone.
Other news:

For more on the last bullet, here's an example: First, they publish a schedule that says that grades for the first sequence have to be filled out by last Tuesday. Yet on Tuesday afternoon, the report cards are still empty. They each need to be filled out by the professor principal. OK, so after checking on this every day for a week, on Wednesday, the names are finally filled in. However, I am also literally the only person filling in grades. One of the vice principals has also left early, so Thursday afternoon I make a special trip to fill out grades for my last two classes. I notice that I am at this point (2 full days past the "deadline") the 3rd teacher of 15-20 who has filled out any of the report cards.

Then on Friday, the vice principal for my (IT) department catches me, is clearly upset, and tells me that my department is behind and I am the last one to report statistics and I need to get him the department statistics (ie, summary of all grades) by Monday at the very latest. I mean, wtf?! If Friday was the "real" deadline for all work to be completed, they should have written Friday on the schedule in the first place. One of the other professors hadn't even given the final exam to one of his classes yet, so reporting is impossible until he collects, grades and fills out the report cards himself! All that said... being Peace Corps, it's not like you can fired for doing something "wrong", but still... still feeling general weirdness about how to interpret "the rules".

Speaking of weirdness in the extreme, I also heard something I don't ever want to hear again: someone (a Cameroonian) defending corporal punishment in school by saying that's what colonials did to motivate Africans on plantations in the U.S!! J.C... how do you even respond to something like that??

Here's the context: the guy in question was an English teacher who was answering a compliment posed by one of us volunteers, "How do you speak such good English?" His answer was that his own English teachers beat the students if they couldn't conjugate the verb "to be", etc. So he studied hard. Really, really hard, basically just to avoid being beaten.

OK... So I would agree that discipline is a problem here. Probably the biggest problem other than lack of resources. Actually, discipline is arguably worse, since the kids will not share the resources (ie computers) they have, and they often don't behave or study well enough to deserve using them. Hence why I bought a projector: they don't learn anything in the classroom, so they can't do anything in the lab. At least with the projector I can walk them through the assignment step-by-step.

Yet many of the kids (if not most) don't study, don't care, cheat remorselessly, hit, yell, chat with others with their backs completely facing me as I'm trying to teach them... it's as if they accept failure very easily and have no interest in classwork at all. But good God... I think it has been proven by now that beating people into submission is Very Bad Thing, and that positive reinforcement actually works better in the long run. It would not be a good thing to have my 300 students scarred for life by memories of being beaten by a white chick, screaming "Click with the LEFT mouse button!! HOLD DOWN the shift key! TURN OFF CAPS LOCK!!"

I really don't think those kids would end up liking computers very much... :)

Posted by Christine Vadai at 5:02 AM