A Step Up: the Software Industry vs. Teaching in Cameroon 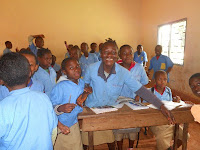 As it's another rainy night in Bandjoun (we are still in the 9-month-long rainy season), I started thinking about my experience in Peace Corps so far. It has been just shy of 5 months, but I'm feeling that joining Peace Corps has been the most worthwhile thing I have ever done.

To put this in context, I spent 18 years as a software developer, most of it working for a large software company. During that time, I had so many options that I was totally spoiled. Not only did I want for nothing, I never even had to confront difficult issues. I was always interacting with people who were similar to me. Being the software industry, none of us had particularly well-developed social skills, but that was not really a problem because it was easy to find people to agree with. Plus, you didn't have to. Debate is often at the very heart of the creative process: it's the best idea that should win, and the ability to sell an idea doesn't necessarily depend upon the social aptitude of the idea's messenger. (Well, it can and often does, but not when no one around is all that socially adept!)

Needless to say, I also had many options for cuisine and housing and activities. If I didn't like a job, I could move to another one. Or I could start doing different work in my existing job... they usually saw that as "initiative" rather than, oh, say... insubordination. That concept did not exist in practice as long as some sort of results were achieved!

In fact, as a manager, the main problem I had with motivating employees was getting them to do the thing I wanted in the manner I knew it needed to be done. I could just mention something and usually they would have it done in hours or days. If the work was challenging it sold itself. The company rewarded great performance. Again, the only issue was whether I could convince them to write (for example) an object-oriented interface rather than the XML that would have been so much easier though less efficient. Something like that was often pulling teeth, but if the final result worked, no harm no foul from my bosses' perspective.

Even then, I thought my life was way too insular. I found I had little ability to connect with people who were not in the software industry. It was difficult to relate to them or find things to talk about. I also felt completely spoiled by 150 cable channels and access to any product within driving distance. Not to mention (reliable) running water, (reliable) electricity, washing machines, dishwashers, an oven and a hot water heater.

Not so anymore. I don't have any of those things. Plus, I am forced to confront issues I never had to deal with before. I can't escape anyone or any situation that is uncomfortable.

Yet I don't feel the least bit deprived. It's bizarre. For all the problems that exist here, figuring out how to deal with them and seeing the positive result is incredibly rewarding! Probably more so than any technical challenge I ever had in my old world.

I'm teaching computer literacy at the high school in Bandjoun. The high school actually encompasses grades 6-12, so I'm teaching kids between the ages of 12-16 at the moment. Motivating older kids is fairly easy: they understand the connection between success in life and good grades (or rather, paying attention and good grades). So they take notes, pay attention and on average do fairly well on tests. The younger kids (6th and 7th graders - 6me and 5me here) do not make that connection. I tried many things, including rewarding them with time in the computer lab if the class behaved. There were mixed results, initially successful and lately not so much. On Tuesday, it was as if they we were at square one again: most of the students were laughing, running out of the classroom, eating (which is prohibited) and only 2 students out of 60 even raised their hands to answer a question from an assignment they were supposed to have done a week before. It was obvious none of them had done it. They weren't very ashamed of that either (as pictured :) 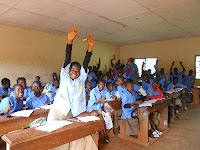 So I had a long talk with a Cameroonian teacher today for advice. His suggestion: for young kids, give them candy if they answer a question. Geez, that's so obvious. I don't know why I didn't think of it. Another gem: if they're talking in class, make them write a phrase over and over a la Bart Simpson. That will shut them up and punish them, and if its a useful phrase they will learn something at the same time. Classic! Yet if that's what they're used to, it's worth trying.

We had a departmental meeting today, which I was supposed to lead as head of the department. The first one six weeks ago was a bit weird. Mostly I had trouble following the rapid-fire French. Yet I was also frequently reminded that I was supposed to be running the meeting, even though I had no idea what it was supposed to be about. As a result, it lasted 4 hours. That's way too long for my taste! Today, the meeting went incredibly smoothly, clocking 1:30. There was a logical progression, and a plausible solution was proposed for almost every issue raised. I am also proud to report that I understood everything that was said. (Granted, a few things were rephrased at my request.) Plus, we set a date for a social event for the department in two weeks. I'll be hosting at my house. This is great: another bridge is under construction!

The department was also very grateful for the projector I had bought. That was another "aha" moment I had last week. I finally realized that the students were not absorbing the content because they didn't understand it. It wasn't because of my accent, as I had suspected. It was because they have no text books, no photos and no computers at their homes. So how can they be expected to understand words on a chalkboard that have no connection with their lives? How can they understand an optical versus a mechanical mouse if they've never seen a mouse?! OK, maybe they've seen a mouse, but not a tablet PC or a smartphone. Certainly not a mainframe. I thought maybe they could make a connection if they saw pictures and video of these concepts, if not the physical objects.

So last week, I bought a projector in Bafoussam. On Monday I brought both 2nde classes to the computer lab, showed them a PowerPoint presentation interspersed with live and video demos and quizzed them every few slides for review. The subject was the components of a PC. They totally got it. It was wonderful to see.

I had disassembled all the computers, so afterwards I told them they had to apply their new knowledge and put them back together to use them. The classes on average were really happy about this, and nearly all of them were able to assemble the computers successfully. Only 2/20 reversed the mouse and keyboard PS/2 connectors in one of the two classes (I made a special point of that distinction). Only 1 in each class failed to notice the disconnected power cord. Better, I have a feeling they will do much better on the test at the end of this sequence.

The next day, I wanted to use the projector on another class, but to my delight, another teacher had noticed the projector and was already using it. So I observed his class: these same 6me students (12-year-olds) who had been so bad in the classroom were now focused and concentrating because the teacher could show them all exactly what he wanted them to do via the projector! I was both amazed and ecstatic at such fast results.

One final point I want to repeat is that I had been living in a large metropolitan area in the U.S. where there are tons of options. Not so here. But I have found that that's actually better: I have found certain market ladies and business owners with whom I have developed a rapport. You can do that in the U.S., but mostly you're dealing with interchangeable staff at megastores. Or shopping online. Here is the difference: your experience is personal, good or bad. If you develop a rapport with someone, don't even have to bargain. My connections even slip me extra product when I buy something now! One wonderful lady kept a school prop I had left in her store one time for nearly a week. And unlike some other business owners who had asked me to pay a deposit to carry away a glass bottle of pop, she didn't care and just sold me a large bottle for 325 CFA (it's 500 at the hotel even without the deposit!) It's a bit ironic that I, someone who made a career out of automating manual processes and removing the human element from everyday activities, I now prefer human interaction for some of those same activities.

So after only 5 months, I can already summarize my "accomplishments". My resume may have a ton of impressive-sounding technical stuff on it, but these I am valuing more at the moment:

In any case, this has been an incomparably rewarding experience and I'm sooo glad I decided to do it.

Posted by Christine Vadai at 11:15 AM